Banksy in Nottingham: Everything you need to know 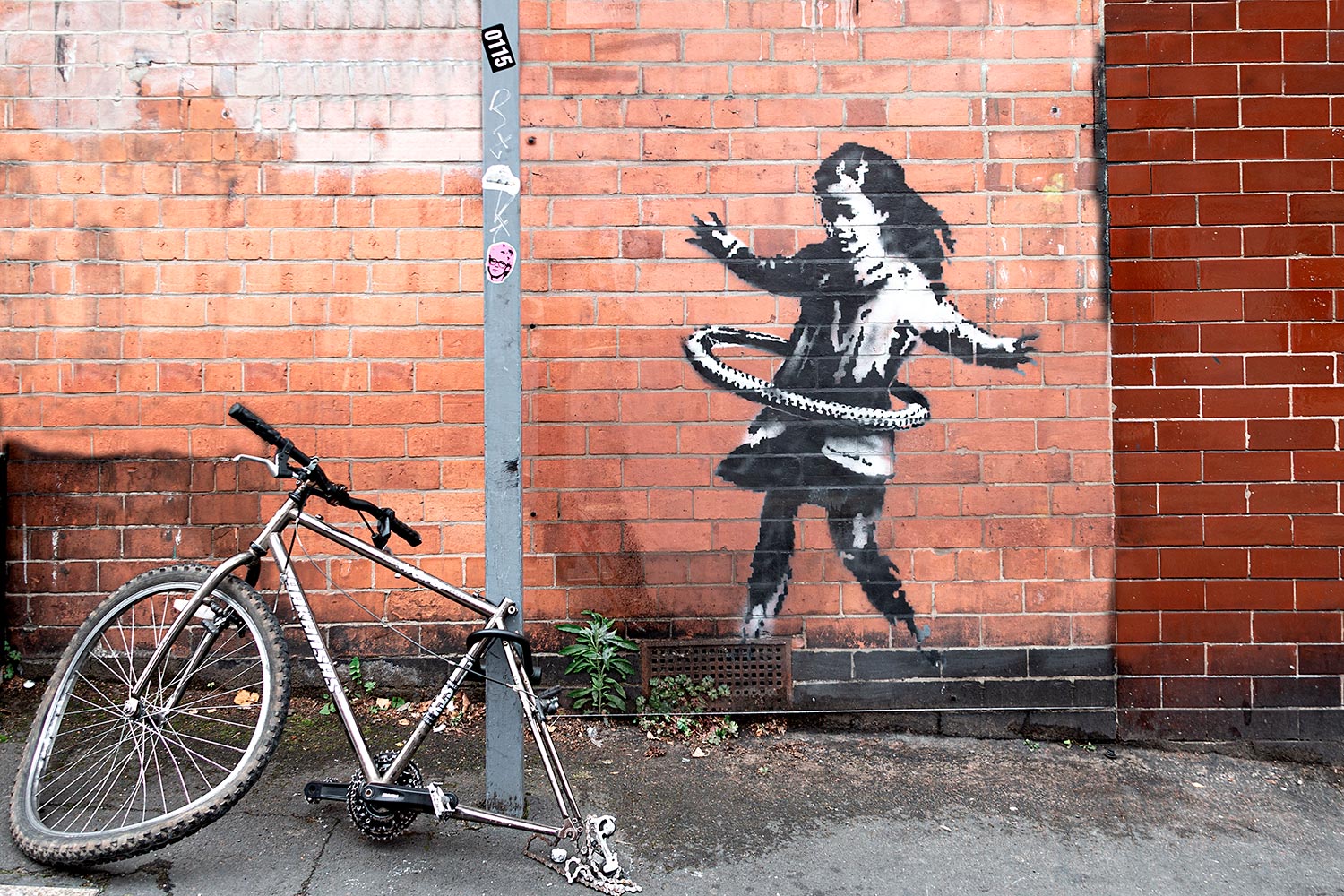 The street art by Banksy depicts a young girl hula hooping alongside a derelict bike with no rear wheel. This street art can be found on Ilkeston Road, Radford, Nottingham. Confirmed at 10 am on the 17th October by Banksy’s official Instagram and website we can confirm that this is the making of Banksy himself.

Said to be created on Tuesday 13th October in broad daylight. A protective Perspex screen has been secured hours later over the top of the street art to prevent any further vandalism to this iconic and valuable piece of art. Many gathered on Ilkeston Road, still confused about whether the street art is real or not and why Banksy would choose the location of Radford, Nottingham? Word quickly spread and curiosity built around Nottingham to find a consistent gathering of people around Banksy’s street art.

When was the Banksy mural created in Nottingham?

The mural by Banksy was not created as secretly as many would presume. The mural was reportedly created in broad daylight. Alex Mitchell (a local shop owner), described seeing the artwork unfold when a van with blacked out windows pulled up at around 5pm on Tuesday 13th October. A piece of cardboard was left gaffer taped over the mural and when Alex returned the next day, the same person was there again.

What does this street art by Banksy mean and why is it in Nottingham?

Nottingham currently has the highest coronavirus infection rate in the country. The area is currently facing a tier 2 lockdown and discussions have been made with regards to moving the city up to tier 3 measures in the near future. Perhaps this could be the reason why Banksy has chosen the location of his latest piece as Nottingham. Whether this is to simply brighten the residents day or if it holds a deeper meaning remains unknown. The art we can see is of a young girl having fun hula hooping next to an old bike. What many haven’t pointed out yet is that the little girl is hula hooping with a missing rear tire. Could this be a symbolisation of the current pandemic? A message of finding joy and beauty from where it is least expected. Perhaps Banksy created this to encourage Nottingham to find hope, joy and happiness out of even the most underwhelming of situations.” Nottingham needs something like this right now – something to talk about rather than coronavirus,” resident Josinya Powell told The BBC.

But why the inclusion of the bike?

This inclusion of the bike has caused confusion around the artwork. Many have discussed that this is a symbolic reference to the city’s Raleigh factory. Raleigh is one of the oldest bicycle companies in the world. However they were forced to close their doors in 2002 ending 114 years in production and the city losing nearly 300 jobs. The closure is reportedly due to cheap imports from the far east.

The art from Banksy in Nottingham has raised many questions yet he has left no answers. Perhaps it is to simply shine some positivity to Nottingham as a result of Coronavirus or maybe the work has a much more meaningful concept that we have not explored yet. However, at the minute the art is open to interpretation and the residents of Nottingham are more than happy to have work by Banksy in their city, I know I definitely am.

If you found this blog interesting then make sure to check out my other blogs and follow my social media to keep up to date with my Photography.