Critical Relationship Between Self and Self-Portrait 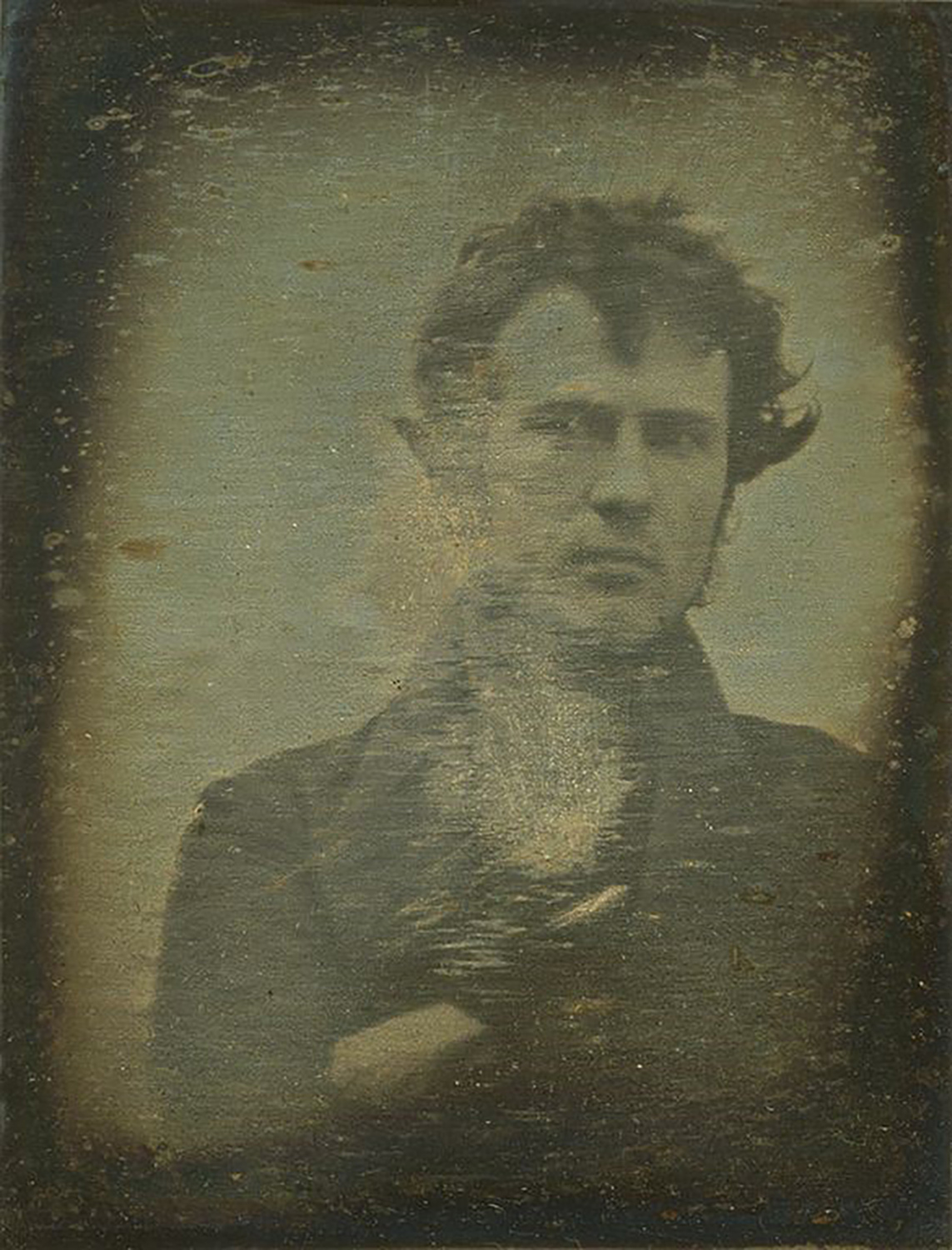 Selfie, ‘A photograph that one has taken of oneself, typically one taken with a smartphone or webcam and shared via social media.’ It was in 2010 that the selfie was born, as in this year the first smartphone with a front-facing camera was released, this phone was the iPhone 4; this new technology made it accessible for many to take ‘selfies’ with ease. Subsequently, four months after the release of the iPhone 4 the first photographic and video-based social media platform was founded, this platform is known as Instagram.

2013, the word ‘selfie’ was Oxford Dictionaries word of the year. In this year 184 million pictures were tagged as selfies on Instagram alone. Compared to the 19th century when a self-portrait was almost inconceivable, the use of a selfie has in the 21st century become a common thing. In the modern-day it is easy to capture a selfie with the use of a smartphone which 2.5 Billion of the population now own in 2019, resulting in an extensive number of self-portraits taken.

When Was The First Photographic Self-Portrait Taken?

The first photographic portrait created is a self-portrait, the creator of this is Robert Cornelius, Robert was an amateur chemist and photography enthusiast from Philadelphia; he created his self-portrait in 1839 at the back of his family store in Philadelphia, The photograph was created in the process of a daguerreotype which was composed by him taking off his lens cap, then running into a position where he stayed for one minute before covering up the lens once again.

The daguerreotype is the first commercially successful photographic process in the history of photography. This process was named after the inventor Louis Jacques Mande Daguerre. To make a daguerreotype a daguerreotypist would polish a sheet of silver-plated copper to a mirror finish, they would then treat it with fumes that made the surface of this silver-plated copper light-sensitive, from there the copper would be placed into a camera and exposed to light for as long as the daguerreotypist would recommend, which could be as little as a few seconds or minutes, depending on the amount of light being exposed to the copper; from this, the silver-plated copper that has now been exposed to light would be fumed with mercury vapour, then removing its sensitivity light by liquid chemical treatment, rinse then dry. This process could only be performed by a specialist within the 19th century resulting in very few portraits taken in this era compared to the modern-day. The process of a daguerreotype is what commenced the trend we now know as a selfie.

Las Meninas is a painting that confuses the aspect of perspective. The painting by Diego Velazquez is one that has raised many theories however after over three centuries researchers have not come to terms with its meaning. ‘Few Paintings in the history of art have generated so many and varied interpretations as this, Velazquez’s culminating work,” (Brown,1986). Upon looking at the painting we see Velazquez himself standing to our left-hand side, holding his brushes, in the foreground we see Margaret Theresa (daughter of the King and Queen), her two maids, two dwarfs and a dog.

However, this painting could also be interpreted differently; some, (such as art historian Joel Snyder) believe that the reflection isn’t of the King and Queen but a painting of the King and Queen which has been painted on the canvas by the painting of Diego Velazquez, however, we cannot see what is on the canvas as from this perspective we are looking behind the canvas, yet it is clear that the painting of Diego is painting what is beyond the painting (behind the viewers perspective). Therefore, could the mirror be reflecting what is on the canvas? Because of this, could Diego could be making a statement on his work? A statement of Look not to nature or your reflection in the mirror for the most marvellous depiction of your image, but my canvas.

From this painting, Diego Velazquez has ingeniously changed the perspective from which we see a self-portrait. He has created an ambiguous view on perspective; this is a common theme in a contemporary lifestyle via social media. Many create a dishonest perspective of their lives on social media such as Instagram, where a vast majority portray their lives to be adventurous, fascinating and interesting whereas this isn’t always the case. Conclusively, one can change a perspective on how one may see another by showing only what they wish for them to see, an unclear and uncertain perspective disrupting the self from the self-portrait.

This Photograph of Nan Golding was taken one month after she was attacked by her boyfriend. Noting that Nan has had a month to recover at the time this photograph was taken but, yet she is still badly bruised. However, she portrays herself confidently, her bright red lipstick that matches the colour of her left eye, her glossy hair, dangly earrings and a necklace show how strong and confident she is of herself despite the bruising. Her portrait consists of elegance which suggests that you are beautiful no matter what the situation, you should always have confidence and belief within yourself. Perhaps she has expressed herself in this way to give a message, a sign to all victims of domestic abuse; a message to be strong even in times of desperation.

One may look at this self-portrait with a different reminiscence, where the signifier becomes the signified. For example, let’s say the signifier is of the bloodshot eye and bruised face, this signified would bring back many emotions of someone who has suffered from domestic abuse, such as fear, be littleness and anxiousness, however, another who may have the privilege of not being involved in domestic abuse would feel something else such as sorrow, grief and helplessness.

This isn’t just a self-portrayed Nan Goldin have given a sign of hope and positivity to the vulnerable, she has shown victims that there is a life beyond a domestic relationship, she has given them hope. Nan has helped to raise awareness for a new generation of artists to concentrate on, to establish how gender, race, violence and sexuality is experienced in the everyday life.

In this self-portrait Nan Goldin is not hiding behind any filters or pretending to live a lifestyle she does not, she is simply associating her selfie with herself. This is the lifestyle that she lives. By doing this she has encouraged a substantial amount of people to rise and speak up about a lifestyle that may be shunned or embarrassed of.

Social media is an immense platform as in 2018 there were 3.1 Billion users, therefore it is a tremendous stage to be heard from. Many use this platform to be heard, whether it is to spread awareness on a specific topic or to show their lifestyle and become admired. For some social media has become a career where they would be paid to promote other brands or businesses on their page due to the large audience they have built.

One who has built a career through social media is Kim Kardashian. With 125 million followers she has the 6th largest account on Instagram (January 2019). Kim first gained media attention as a friend and stylist of Paris Hilton, but then went onto receive a much wider notice after a sex tape with her former boyfriend Ray J was leaked in 2007; from this attention, Kim Kardashian now has been in multiple TV shows including her own ‘Keeping Up with the Kardashian’, she has created her own mobile game in 2014 ‘Kim Kardashian: Hollywood’, a variety of clothing and products and her 2015 book ‘Selfish’.

Within Kim Kardashian’s social media account, she has complete control over what her 125 million followers see, many of her Instagram posts have been edited in a way that would gain more attention or for herself to appear more attractive, creating this false view on her lifestyle. As a result of this many wish to achieve such a lifestyle when in fact even Kim Kardashian is not living the lifestyle that she portrays via social media. An example of this would be that Kim has received countless amounts of plastic surgery, yet she still avoids or denies this, making it unclear whether she has had any surgery or not which has resulted in increased anxiety around body image in young people. Kim has created a false persona, disconnecting the self from the self-portrait.

On the other hand, many users of social media use the platform to spread awareness on certain aspects to spread positivity or normalise something that may be despised. An example of this would be a trend in 2015 ‘#wejustneedtopee’, This trend was used across many social media platforms such as Twitter, Instagram and Facebook. The trend was used to retaliate against North Carolina as they enacted a law requiring that people be allowed to use only the public restroom that corresponds to the sex on their birth certificates. The hashtag was then used to raise awareness on the use of what public toilet a transgender may use. To express this retaliation a large community of Transgenders would take self-portraits of themselves within the bathroom that they are ‘identified’ to be in, resulting in them feeling uncomfortable, out of place and even confronted. This use of social media shows how powerful social media can be when used correctly as the White House had taken an opposing position, directing that trans students be allowed to use the bathroom that matches their gender identity. Now in 2019 gender-neutral bathrooms are seen much more commonly than they had been previously.

This self-portrait is showing us a glimpse of what it is like to live as transgender, Michael is simply stating that he does not feel he belongs in a women’s bathroom simply because he was born female. This self-portrait is not hiding Michael’s identity but showing the struggle he must go through to live a simple life; Michael is therefore connecting the self-portrait to the self. Now thanks to social media Michael can use the bathroom he wishes.

Conclusively the selfie is an insight into one’s persona. The idea of perspective within a selfie is endless just as Diego Velazquez has proven, as from one painting could become multiple theories which is what makes selfies so interesting. People use selfies via social media to change the perspective on how one may observe their lifestyle, by perhaps creating a deceitful lifestyle that many could only wish for such as Kim Kardashian. However, a selfie also has the power to spread awareness and positivity in the worst of situations just as Nan Goldin and #wejustneedtopee have successfully achieved.

Nerdwriter1., 2016. ‘Las Meninas: Is This The Best Painting In History?’ Link –https://www.youtube.com/watch?v=WKRKrpz09Fk

If you found this interesting then make sure that you check out my other art blogs.

What is the Best Cloud Storage for Photography? Unlimited Photo Storage.
15/01/2022
The Hunna Blew up Like a Bonfire at Rock City, Nottingham
10/11/2021
DiMaggio Jones Perform in Lincoln on Behalf of Unlocked Lincoln
05/11/2021