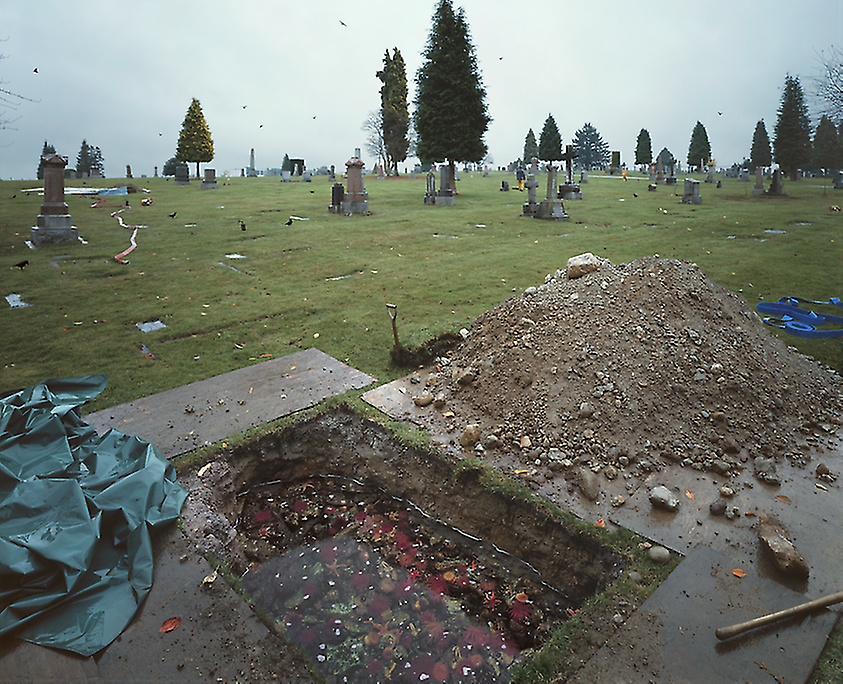 The flooded grave, a Photograph created by Jeff Wall. This photograph is composed of 75 different 35mm Photographs that have been taken over a two-year period (1998-2000). Jeff uses state of the art photographic and computer technology to create images that recall the composition, scale and ambitions of the grandest historical paintings. This image is the result of two years of work that the artist fused both documentary and staged scenes into one surreal Photography. Jeff created this artwork by Photographing two cemeteries in Vancouver over the course of several months, he then built an aquatic system in his studio from a plaster cast of an actual grave creating a living, underwater ecosystem. Instead of the Photograph is a record of a single moment, it is a fantasy on the subconscious life of the image it projects.

At a glance this Photograph can be seen as a banal landscape of a graveyard, however, looking closer you see that the presence of sea life within the freshly dug out grave removes the banality from the image. Jeff Wall states that ‘we just suddenly associate water with the ocean in your mind’ (Wall. J, Stedelijk Museum Amsterdam, 2014), What Jeff is stating is that once our eyes signify water, the signified becomes the ocean. This has resulted in Jeff creating a composite of sea life within the freshly dug grave rather than what should be rainwater; as ‘if you did have such a daydream you would see that, your mind’s eye would see it, so I fixed that by means of a photograph’ (Wall. J Stedelijk Museum Amsterdam, 2014).

The perspective from which the photograph is taken is from one who may Flaneur, as Jeff states the work was to be created as ‘an instantaneous vision in which a person strolling in the graveyard just on a walk maybe walking their dog sees a freshly dug hole’ (Wall. J Stedelijk Museum Amsterdam, 2014). The Photograph has been staged as though it is something that you may stumble upon. From a closer observation we see that there is sea life at the bottom of the grave, something that we would not usually discover on a walk with our dog; what we are seeing here is a surrealistic fantasy created by photographic and computer technology.

To call this work a documentary photograph would not be reasonable as a documented photograph would mean that it had occurred naturally which this has not. This work has been significantly edited to create an event that had not occurred. In addition to this, you could also argue that Jeff Wall is documenting the subconscious mind by producing work that materialises what we evoke when we see the water. Jeff comments on his own work by stating ‘in my pictures I insist that there is no fiction and that the word fiction does not really apply to my photography, at least maybe it doesn’t apply to photography at all’(Wall. J Stedelijk Museum Amsterdam, 2014). This statement by Jeff means that within his work he doesn’t consider what is already invented or untrue, for example, the flooded grave is invented and untrue however it is true in the presence of the subconscious. Conclusively I suspect that this work fits into the category of subconscious documentation.

The reason to why Jeff opted to use this graveyard as his final piece was because of the placement of the trees. ‘But in this one there are upright stones and even some old statues. It also has the solitary, well-placed trees that we identify with cemeteries. I liked it best’(Wall. J, withrefdeath, 2015). Could Jeff be referring to the belief of reincarnation, with trees growing and living from where the dead settle or even that life is portrayed in a grave where we bury the dead? Many of us observe sea life as beautiful; with sea life being exhibited in a grave this could also represent the faith in an afterlife.

Conclusively I believe that the context of this photograph is referring to the materialisation of the subconscious. When most of us present ourselves upon the water, we subconsciously associate water with the ocean. Therefore, observing upon a flooded grave our mind’s eye witness’s life in the grave, sea life that would entirely be found in the ocean. Because this life is exhibited where we deposit the dead could also be a symbolic reference to the beauty of the afterlife.